Return to Table of Contents

Code lists are the standardised lists of values allowed at the given location of the GS1 EDI message. GS1 uses values from two types of sources:

Code lists defined and maintained outside of GS1

Most code lists used in GS1 GS1 EDI standards are defined and maintained outside the GS1 community, usually by other standard bodies, e.g. Country Codes, ISO 3166-1:1997. GS1 uses international standard code lists whenever available in the following order of priority:

The UN/EDIFACT code list: 4221 “Discrepancy nature identification code” has been restricted to three values relevant for the GS1 users. The list has been named ‘RemainingQuantityStatusCode’ and is published in the BMS eCom Common Library.

Whenever a value needed by the GS1 users is missing in a non-GS1 code list, it can be added as a “GS1 Code”. In parallel GS1 will submit a request to the managing agency to formally add the code value to the original list.

Note 1: GS1 assigns a temporary code value that will be changed by the managing agency once the code is approved as a formal addition to the original code list. Thus, the early implementers should be aware that the code value will change over time.

Note 2: In some exceptional cases, GS1 may assign codes that are not submitted to the managing agency. They will be flagged and ‘GS1 permanent Code’. Such flag will also be used if the managing agency refuses to add the new code value and there is a clear requirement from GS1 users to add this value.

This is a type of code list where each value identifies a code list that can be referenced for the list of values. Trading partners are expected to mutually agree which list will be used, then select and send the code list value that matches the business requirement.

This approach provides flexibility for trading partners to select the code list appropriate to their usage, while also restricting the list to those that have been identified as valid options to support a specific context.

If the restricted list selected by trading partners is the “National Retail Federation Standard Colour Code List”, and the manufacturer wants to send a colour code that represents “dark blue”, they could send the code value of “401” (the NRF 3-digit numeric code for dark blue).

These code lists should be mutually agreed between trading partners, because GS1 does not specify the code list to be used. They are typically used when there are multiple code lists that could be implemented depending on the industry, geopolitical region, e.g. regulatory or tax codes.

It provides flexibility for trading partners to mutually define the code list appropriate to their usage.

These lists are defined as the ‘CodeType’ containing a number of optional attributes that allow provide the code list properties necessary to fully identify the list used. 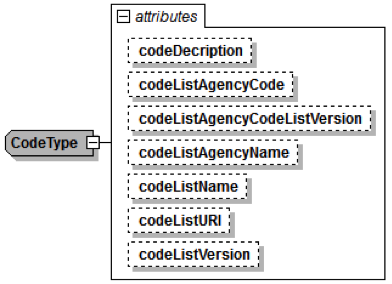 The ‘BarCodeTypeCode’ published in the BMS Shared Common Library.

Most code lists values are stored outside of the XML schemas. Thus, the user needs to look up the permissible values in the BMS documentation or the GS1 Global Data Dictionary (GDD).

This approach allows decoupling the code list management from the schema versioning – the values can be added between schema releases. It increases speed of implementation for messages where only a code addition is needed.

Code list values are enumerated in the schema only if all the following criteria are met:

The code lists whose values are enumerated within the XML schema are referred to as “enumerations”.

The “Day of the Week Enumeration” or “Document Status Enumeration” published in the BMS Shared Common Library.

The code lists not enumerated in the schema can be updated when needed, which means that new values requested by the users are added as soon as they are approved.

Each revision will be identified with a sequential number, starting from r1, the next one will be r2, r3 and so on. The publication date will be included in the header data of each code list.

The code lists are versioned independently of the Business Message Standards, although the BMS publications may recommend use of the minimum code list version or higher version that is applicable to a specific release.

[Code List] Version r3 or higher is recommended. Refer to the Global Data Dictionary for the list of values.